No ads found for this position
Nijgadh Airport

An extended full bench quashes all decisions regarding the airport, envisioned as alternative to Kathmandu airport. 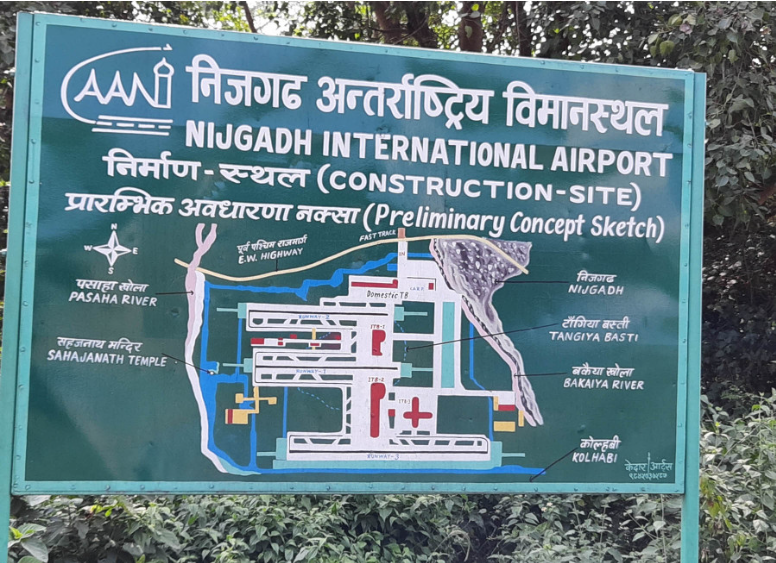 KATHMANDU: MAY. 27 – The Supreme Court on Thursday quashed all government decisions to construct a modern international airport in Nijgadh, Bara as an alternative to Kathmandu’s Tribhuvan International Airport.

An extended full bench of the Supreme Court ordered the government to find an alternative site to Nijgadh if it wants to build the facility that it envisions will put Nepal in the big league.

The fate of the $3.45 billion Nijgadh International Airport had been hanging in the balance for years, with successive governments pushing for it and environmentalists resisting it equally fervently, citing massive damage to the environment, biodiversity, local communities and wildlife that the touted project would cause.

Located 175 km south of Kathmandu, the proposed construction site lies adjacent to Parsa National Park, which is a forest corridor for big wildlife like tigers and elephants, and home to rich biodiversity. The entire area is blanketed in dense forests of Shorea robusta trees, also known as sal or sakhuwa.

According to an environmental and social impact assessment carried out by the Tourism Ministry in February 2017, more than 2.4 million small and large trees would have to be felled to build the international airport, in three phases.

According to one of the justices of the bench, the court has ordered the government to go for an “appropriate alternative” to build the international airport following the country’s laws. “The full text of the order will come soon,” the judge said.

He added that the court had not said whether or not to build the airport but to consider the environmental issue. “Everything will be clear when the full text comes.”

The government has poured more than Rs2 billion into the project so far. According to officials of the Civil Aviation Authority of Nepal, nearly Rs800 million has been distributed as compensation to the project-affected people.

In April 2012, Landmark Worldwide Company of South Korea conducted a detailed feasibility study for the airport at a cost of $3.55 million and submitted its report to the government

“It is a strange decision, but we have to honour it,” said Sanjiv Gautam, former director-general of the Civil Aviation Authority of Nepal. “Nijgadh is an appropriate location from all aspects to become an alternative to Kathmandu’s Tribhuvan International Airport,” he said.

“Obviously, we have flat land and airspace elsewhere, but these sites won’t serve as an alternative to Kathmandu airport.”

In 1995, the government initiated discussions to construct a second international gateway in the plains as an alternative to Nepal’s only international airport in Kathmandu.

The decision followed two deadly aviation disasters involving Thai Airways and Pakistan International Airlines in the hills surrounding Kathmandu in 1992. This gave momentum to discussions on an alternate airport and how the difficult topography of Kathmandu poses a challenge for even experienced pilots to land.

The project remained on the drawing board for two decades and gained renewed urgency after a Turkish Airlines aircraft skidded off the runway in Kathmandu in March 2015, causing the airport to be closed down for four days.

The proposed Nijgadh International Airport got embroiled in a controversy after an environmental impact assessment showed that more than 2 million trees would have to be cut down to build the facility. For the past year, environmentalists have been campaigning against it, arguing that the damage the project would cause to the environment and biodiversity would be irreparable.

Nijgadh was planned to be the largest airport in South Asia in terms of area, covering 8,045.79 hectares when completed. It would be developed in three phases with the first phase expected to last 10 years.

After the controversy, the project’s executing agency, the Civil Aviation Authority of Nepal, reviewed the plan to reduce the environmental impact and decided that only 1,900 hectares would be taken over in the first phase.

On December 6, 2019, Supreme Court Justice Tanka Bahadur Moktan issued a stay order asking the government to immediately stop the felling of trees at the site, which a division bench of Chief Justice Cholendra Shamsher Rana and Justice Kumar Regmi upheld on December 22.

Given the proposed airport’s proximity to Parsa National Park which is a habitat for endangered wildlife, conservationists say the construction will destroy the natural corridor used by wildlife.

They say a majority of streams in Bara originate from the proposed building site. These streams irrigate vast swathes of farmland in the southern plains. The airport will cut off these water sources. The national park is home to hundreds of spotted deer, 18 to 20 tigers, four to six rhinos and more than 60 wild elephants.

Despite the concerns and constraints, the government has zeroed in on Bara to build the international airport.

Investment Board Nepal decided to move ahead with the project regardless of the court ruling and invited potential bidders to submit proposals, insisting that the court order only prevented them from cutting down the trees and did not say that all work should come to a halt.

In September 2019, the government shortlisted Zurich Airport International AG as a single company to work in a public-private partnership model for the construction of the airport.

The board had received letters of intent from eight companies from seven countries, including Nepal. On January 17, 2020, the board formally asked Zurich Airport to submit a business proposal.

Under the public-private partnership modality of build, own, operate and transfer, the Swiss company would fully fund the construction project.

Zurich Airport was required to state for how long it would operate the airport before handing it over to Nepal in the business proposal.

The last date for submitting the document was September 30, 2020; but following the court order, Zurich International Airport AG asked for a time extension.

The Swiss company made no further official communication after that.

“The environment impact assessment report is also not credible. We need the airport, and it should be constructed by minimising environmental damage.”