No ads found for this position
Gas Price Soar

The price of a 14.2 kilogram cylinder has crossed 1,000 rupees in some parts of India. 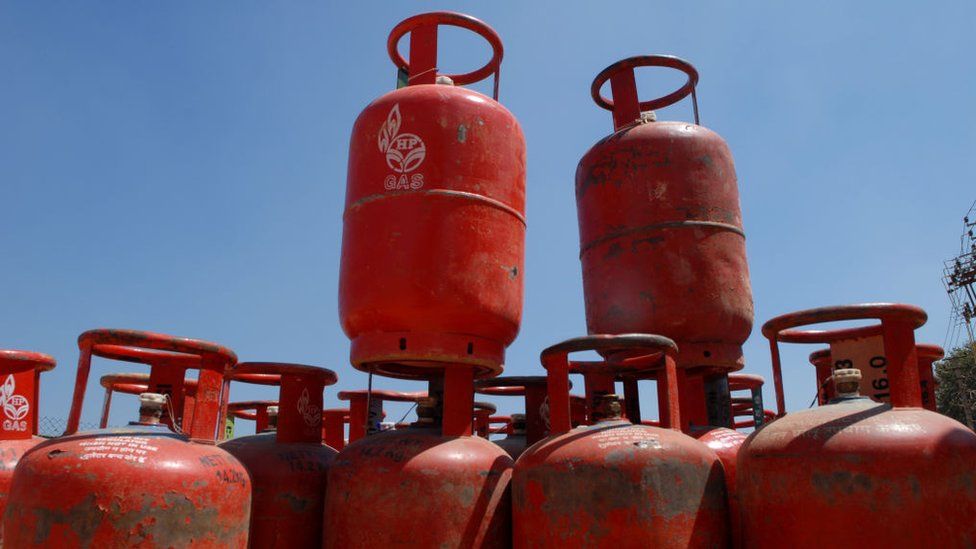 “I’m always anxious when I light the kitchen stove these days. I have to make sure our gas cylinder lasts for at least two months,” a woman in India’s national capital Delhi told a colleague last week.

The woman, who didn’t want to be named, is among millions of Indians struggling to afford cooking gas cylinders – which use liquefied petroleum gas (LPG) – after a series of price hikes over the past year and a half. The most recent hike last week – of 50 rupees (0.65; £0.53) – led to the price of a 14.2-kilogram cylinder crossing 1,000 rupees in some parts of the country.

Cylinder prices have long been a hotly-debated political issue in India, with opposition parties – including the ruling Bharatiya Janata Party before it came to power in 2014 – routinely taking to the streets to protest against hikes.

But the issue has become even more sensitive after the Covid pandemic, which suppressed incomes, caused job losses and exhausted savings.

But the pinch on people’s pockets is expected to continue as companies pass on high borrowing costs to consumers.

Experts say any increase in the price of essential commodities such as cooking gas cylinders at a time of high inflation will force people to cut back on other priorities.

“Different households make different choices on where to cut spending, but we have seen that food and education are two common categories – for instance, people may decide to stop buying milk or paying for their children’s coaching classes,” says Himanshu, an economist and academic who only uses his first name.

Both choices, he points out, will have negative long-term consequences.

High cylinder prices may also be reversing the noticeable gains made by the ambitious Pradhan Mantri Ujjwala Yojana, which was launched by Prime Minister Narendra Modi’s government in 2016.

The scheme aimed to move poor rural households away from high-polluting fuel sources such as wood, to cleaner energy by giving them subsidised LPG connections and cylinders – the government said in 2019 that it has provided more than 80 million connections under the programme.

But it also pointed out hurdles that prevented even people who had received LPG connections from using only that for cooking.

“The biggest reason given by households that owned an LPG connection but stacked it with other cooking fuels was the inability to afford the high recurring expense of refilling their cylinders,” says Sunil Mani, a programme associate at CEEW and one of the authors of the study.

There are several other reasons that prevent people from transitioning to exclusive use of LPG – from lack of awareness to difficulties in procuring cylinders.

“But that is all secondary to the affordability barrier. That needs to be solved first,” Mr Mani says.

According to research from CEEW, an average household in rural India set aside 4.9% of its monthly expenditure on procuring cooking fuel in March 2020.

By April 2022 – when the price of a cylinder was at 950 rupees – this had risen to 11% of the household monthly expense. Even this number, Mr Mani says, is likely to be an underestimate as it assumes that incomes have remained constant.

It’s essential, he says, to give adequate, targeted subsidies to poorer households to ensure that the gains made by the scheme are not undone.

Himanshu also adds that the government has to provide relief through spending more on subsidies and other welfare measures.

“Unless the government absorbs the price shock, people will cut their spending, leading to a further decline in demand. It is a vicious cycle,” he says.

There are major health hazards as well.

People in urban areas have fewer choices when it comes to LPG alternatives, and it’s hard to cook over an open flame in small rooms without proper ventilation.

But people in rural areas are more likely to return to unclean options such as cow dung and firewood – which cause major health risks. According to the Global Burden of Disease study, household air pollution accounted for more than 600,000 deaths in India in 2019.

Mr Mani points out that the health risks have only increased due to Covid, which affects the respiratory system.

“Preparing alternatives to LPG is also a gendered activity – the burden usually falls on women.”