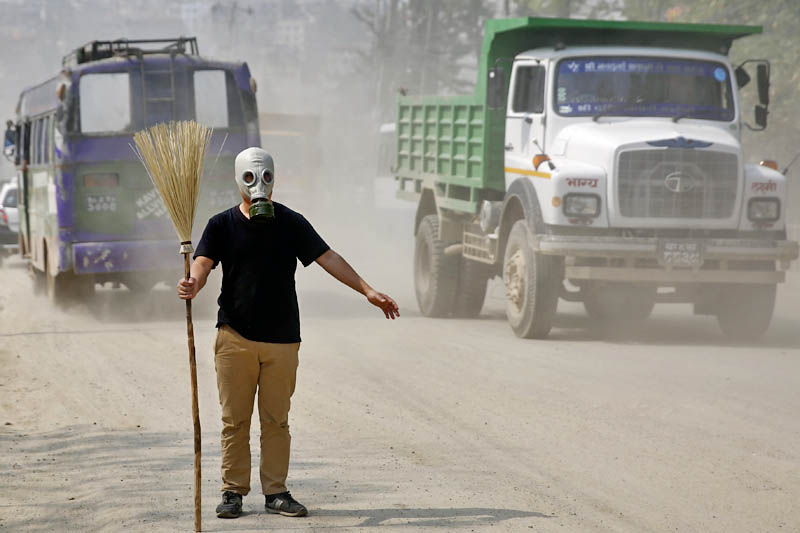 The change from chilly to warm glorious spring mornings hasn’t gone unnoticed. It could even be mistaken for summer, considering the strength of the sun’s rays. But of late, the Valley has been waking up to a strange concoction of dust particles and pollutants from numerous sources, primarily resulting from vehicular movement, brink kilns and burning household waste. Due to the abysmal waste management, people in the Valley have resorted to burning their domestic trash; an easy and effective way to dispose of unwanted things as far as they are concerned—which has amplified the already bad situation of air pollution into something much worse.

If there was one positive residue from the numerous lockdowns during the heyday of the pandemic, it was the effect on the atmosphere. People were able to reflect for once how mismanaged our policies around the environment have been for so long. Unbreathable smog that weighed down heavily on the people gave way to clear blue skies within a matter of days, brought on by a slew of stringent measures enforced to restrict the spread of the coronavirus. Residents of major cities who have long suffered worsening air quality could finally breathe a sigh of relief.

The realisation seems to have been short-lived. As the pandemic waned, so did the desire for a balanced environmental policy. In trying to prop up their wrecked economies, it was easier for countries to go back to their old way of doing things rather than striving to remedy the effects of environmental damage. And in Nepal, not only is there a lack of a strict environmental policy, but there is also an absence of civic sense amongst the general populace. While meteorologists have stated that the air quality in the Valley hasn’t reached hazardous levels, the worse is yet to come.

Scarce rainfall and rampant burning of stubs after harvesting by farmers will only further aggravate the situation. And there is no problem without a solution. First and foremost, why can’t the authorities fix the recurring problem of managing waste? Heaps of household waste often lie strewn around the streets, to be trampled by humans and run over by ever-burgeoning motor traffic. And this mismanagement has now pushed people to burn their waste adding to the growing list of existing problems. The waste management situation will only worsen with the onset of the monsoon. Well, at least we’ll have the rains by then to quell the hazardous air pollutants, but that will also leave us with rubbish floating around the streets.

The pandemic has shown us that if we effectively manage the remote working habit, it could favourably impact the traffic congestion that notoriously plagues us, and in turn, also have beneficial outcomes for the quality of air. Not everything needs the ratification of the government. As ordinary citizens, we can set the record straight and shed light on the existing problems if the government cannot tackle such issues. But in return, what we need is the government as facilitators in the process of change, and if they can’t be that, they shouldn’t certainly stand as a hindrance.