UNITED STATES: JUNE 23 – Early evidence suggests that the highly contagious delta variant, which has prompted concern worldwide as it leads to new surges of COVID-19 across the globe, is spreading in undervaccinated pockets of the U.S.

The genomics firm Helix analyzed about 20,000 samples from COVID-19 tests across more than 700 US counties. It found that cases of the variant first documented in India appear to be growing far faster in counties with lower vaccination rates than in areas that have higher rates.

The ongoing spread of the variant in pockets of low vaccine uptake are troubling because they create more opportunities for the virus to thrive and mutate. The longer the virus spreads, the more chances it has to create easier inroads into human cells, and potentially take on deadlier forms.

“Delta is driving surges around the world, and I suspect it’s going to be the same here,” said William Lee, the vice president of science at Helix. Delta is growing more than twice as fast as gamma, the variant first seen in Brazil, in undervaccinated communities. 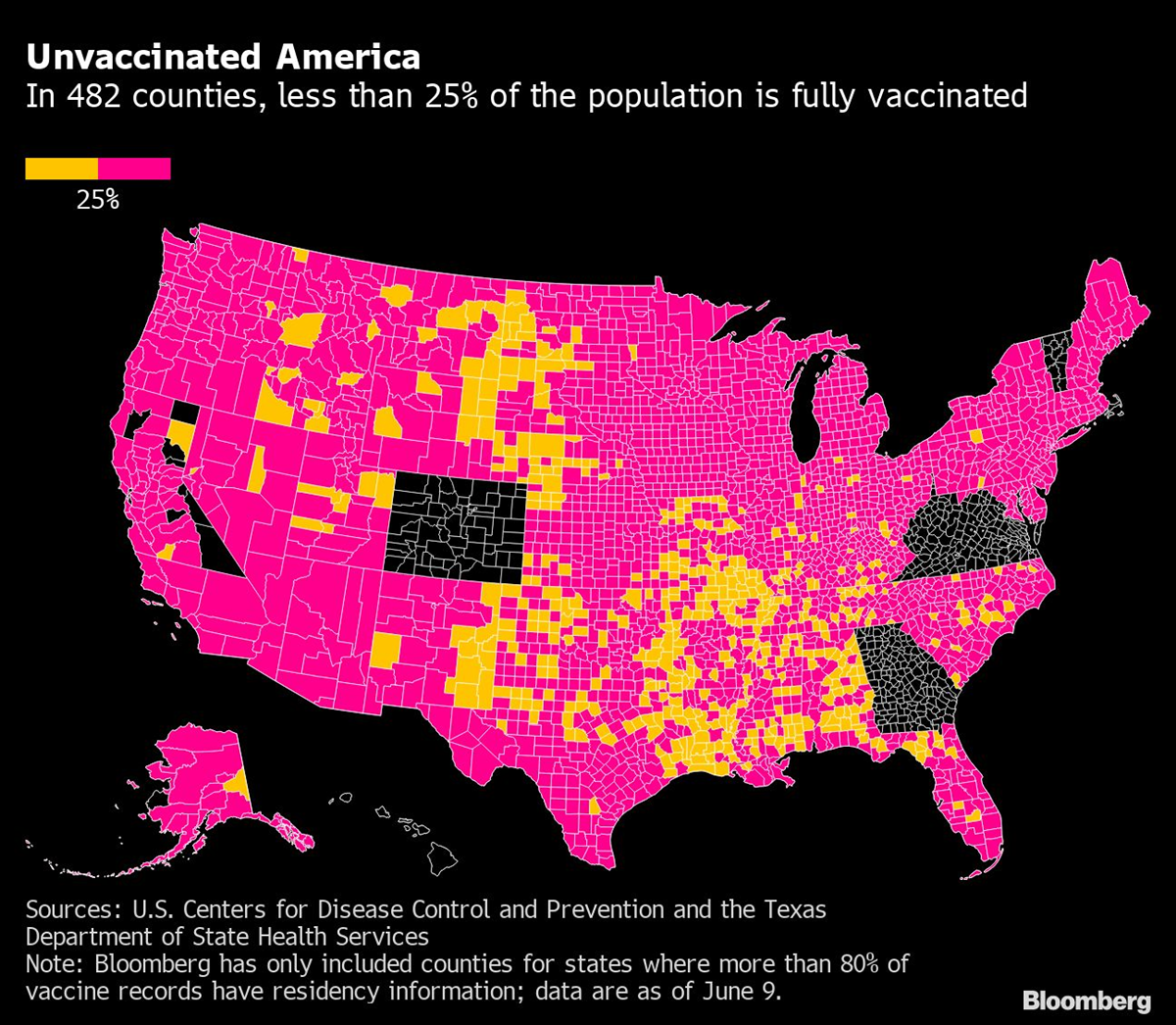 Meanwhile, the gamma variant, which appears better at evading vaccines, was found to be more prevalent in counties with higher inoculation rates. The Helix research, which hasn’t yet been subject to peer review, is to be published in an upcoming pre-print online.

So far, more than 45% of the U.S. population has been fully vaccinated, according to the Centers for Disease Control and Prevention. But a recent Bloomberg News analysis found that broad, national numbers often obscure more troubling patterns at the local level.

Less than 25% of the population is fully vaccinated in at least 482 counties, Bloomberg found in an analysis of 2,700 U.S. counties.

Helix, which has been working to track the spread of variants through its Covid-testing program, looked at samples collected through its testing program prior to mid-June that it then sequenced. It then compared the county of residency of the patient against the CDC’s county-level vaccination data, dividing its samples into two roughly equal groups based on the vaccination rates of the counties they are from.

In one group, the number of fully vaccinated people in the county was above 28.5%, in the other it was below. By doing that, the company found that delta cases was rising faster among people who live in counties with lower vaccination rates.

The alpha variant, first found in the U.K., has been the dominant strain in the U.S. But the “gamma and delta have gained a strong foothold and may soon push alpha out,” Helix’s Lee said.

In a new report issued by the CDC on Monday, the agency found that among those 18 to 39 years old, vaccine safety and effectiveness were both commonly cited barriers to vaccination.

The agency said it is especially important to reduce hesitancy among younger Americans, who have been among the demographic groups least likely to take the vaccine. Polling has also suggested that there is significant hesitancy among rural populations, Republican voters and people of color.

Polling by the Kaiser Family Foundation suggests that there are still a large number of holdouts in the U.S., with about 13% of Americans planning to avoid the vaccine no matter what, another 12% saying they are waiting before making a decision, and 7% saying they’ll get vaccinated only if required.