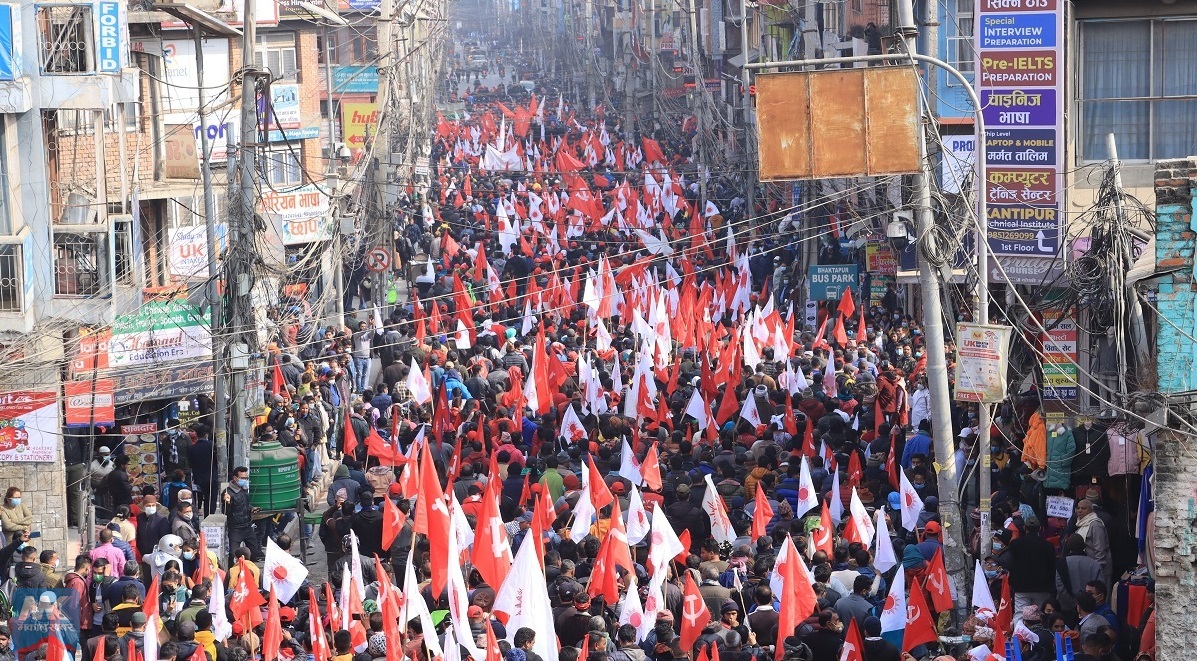 Kathmandu. The Nepal-Dahal faction of the CPN (Maoist) staged a massive protest on December 29 against the dissolution of the parliament by Prime Minister KP Sharma Oli, just like today (Friday). Traffic jam throughout the day. While the pros and cons of Oli and Nepal-Dahal were being debated, no one felt the need to talk about ‘Jansasti’.

At around 8 pm that evening, a friend posted a three-line status – “Today is the first time I have felt the torment that the movement has inflicted on the people.”

She was walking for the exam that day. What happened was that the vehicle she was riding in dropped on the road saying ‘the road is closed’. Fear of not reaching college on time made her lose her temper!

‘Tuttle was the only way to get to college on time. But oops, jam. Blessed is the show of the people of my country. Half an hour later, she arrived half an hour late, saddened, ‘she wrote on Facebook. An unforgettable day in life! ‘

Probably, like her, today has become an unforgettable day for many. Some may be late for exams. Some employees may have been scolded by the boss for not arriving at the office on time. How many drivers may have suffered losses due to not being able to take the citizen to the destination. How many students have to walk home from college?

Because even today the CPN (Maoist) had the same massive demonstration. The traffic police did not allow vehicles to enter Ratna Park-Singha Durbar section and Padmadaya Mod-Bhrikuti Mandap section. The vehicle heading towards Ratna Park was diverted to another place before 9 o’clock in the morning. Traffic was affected due to the procession. Diverting vehicles from the main road also increased the pressure on the alternative roads and also the traffic jams.

Today, all these problems have been created by the ruling CPN (Maoist). Those who are claiming to continue their fight for the rights and interests of the citizens do not seem to understand the suffering and problems of the citizens.

In fact, their fight is not for the citizens, but for the chair. The pain of not getting a seat has been collected by the cadres from all over the country and spread on the roads all over the country including the capital. While the farmers are demanding to pay the price of their labor on the streets, the political parties, which do not consider it necessary to speak in their voice, have been torturing the people and attacking each other for the benefit of the people. Gamblers are using the people as weapons and playing satire.

Of course, even the citizens who elect leaders have a big hand in these ‘tortures’. Meeting those who do not have the ability, talent and image to become leaders by selling them for short-term gain is to invite such torturous days. At least it is very important for a leader to be honest with the country and loyal to the people. The country will move forward only if there is a leader who is not reluctant to sacrifice his life for the country and the people, is steadfast, capable, capable, educated, ideologically clear and has a vision.

Leaders need to think more about the country and the people than about themselves, but Nepal’s leaders have no time to think about themselves. If only some of these qualities were present in the leaders of Nepal, perhaps the slogan ‘Prosperous Nepal, Happy Nepalis’ would not be limited to slogans.

Leaders who are committed to making the country prosperous are not talking about the country, they are leading the speeches and movement towards prosperity. The Prime Minister is moving towards the prosperity of his speeches by delivering eloquent speeches day by day, while the Nepal-Dahal faction of the CPN (Maoist), which has become his opponent, is expanding the style of agitation and demonstration day by day. And who should focus on rape, murder, violence, corruption, Covid 19 infection control?

The leader’s focus is on the return movement. The Prachanda-Madhav group has stated that the agitation will continue until the unconstitutional step of dissolving the parliament is taken. On top of that, the opposition parties are also in favor of the demonstration. How long will the citizens still have to endure this torment? No matter who you complain to, the leaders have come to the streets for their rights!